Michael initially completed a Bachelor of Information Systems (Hons) at Melbourne University. During his years at university, sharing wine with friends over assignments, he began to develop a love of wine. In 2003 Michael decided to pursue this passion, enrolling in a Bachelor of Viticultural Science and Winemaking at La Trobe University in Melbourne. 2004 was also the year that Michael made his first wine, a Shiraz made in his garage, and from that point on his focus became winemaking.

After graduating he worked vintages in Turkey, New Zealand, France, Victoria and Western Australia. Michael has since grown exponentially as a winemaker and has gained 5-Star ratings from James Halliday for Forest Hill, Rockcliffe, Peos Estate, Willoughby Park, Ironcloud and Nannup Estate.

Michael joined Silkwood Estate in 2018, bringing with him knowledge and experience from more than a decade of winemaking. 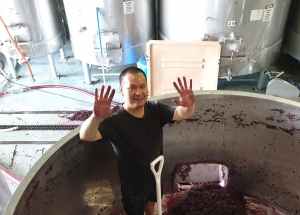